March is Women’s History Month and there is no better example of New York Women’s achievements than Narcissa Prentiss Whitman, one of the first two non-Indian women to cross the continental divide in 1836.

American adventurer William J. Snelling wrote in the February 1832 issue of New England magazine, “Only parties of men could undergo the vicissitudes of the journey; none who ever made the trip would assert that a woman could have accompanied them.”

Oregon Country historian and biographer Clifford M. Drury wrote “the successful crossing of the Rockies through South Pass by Mrs. Whitman and Mrs. Spalding on July 4, 1836, unlocked the mountain gateway for men who wanted to take their families with them to Oregon.” The families who followed them over the Oregon Trail and settled in the fertile valleys of Oregon and Washington were important factors when the U.S. and Britain settled the dividing line between Canada and the U.S. at the 49th parallel in 1846. There are monuments to Narcissa and Eliza Hart Spalding across the US that we’ll be featuring in the next few months.  These women belong in the Women’s Hall of Fame for their achievement. 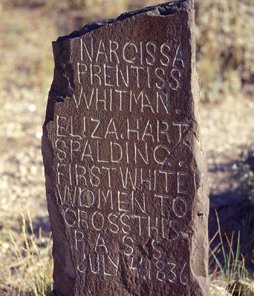